This rare and first-ever signed Animated NFT minted by Brett Minnich commemorates Texas A&M 2022 college world series appearance. This beautiful piece of Digital Memorabilia represents a historic moment in time and is sure to be coveted for generations to come. 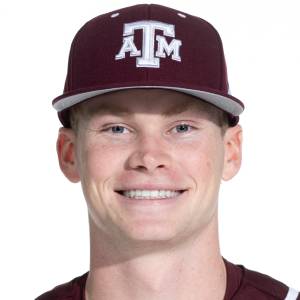 AT BLINN COLLEGE: Played two years at Blinn College in Brenham, Texas, for Coach Harvey McIntyre... played in 22 games during his sophomore campaign, due to the season being cut short... hit .229 with five doubles, one triple, one home run, six RBI and six runs... played in 47 games for the Buccaneers during his freshman year... hit .318 with 31 runs, 11 doubles, six triples, three home runs and 34 RBI... helped his team win the Regional Championship as a freshman in 2019... selected as a Texas-New Mexico Junior College Baseball Coaches Association All-Star and earned all-conference as a freshman.

AT COLLEYVILE HERITAGE HIGH SCHOOL: Three-year letter winner for Coach Alan McDougal at Colleyville Heritage High School... during his senior campaign, helped his team to the fourth round of the state tournament… in the third round, hit a walkoff bomb to send his team to the fourth round… reach the fifth round of the playoffs as a junior… also a three-year letterwinner as a wing for the Basketball team… earned All-District Honorable Mention and Defensive Player of the Year… played summer ball for the Texas Stix.